One week is not nearly enough to cover Cambodia so we debated whether to go at all. However, we decided some time was better than nothing at all. Especially for the temples of Angkor Wat which we distinctly remember topping the ‘Ultimate Travelist’ by Lonely Planet. The temples of Angkor Wat are the largest religious monument in the world and date back to the 12th Century, that’s around 900 years ago.
We made our trip to Cambodia part of a shoestring loop from Bangkok, visiting Vietnam as well. It made for a nice 3-week tour around South East Asia before returning back to Thailand and heading south towards our final destination of Bali for our return flight home.

Our itinerary for Cambodia: 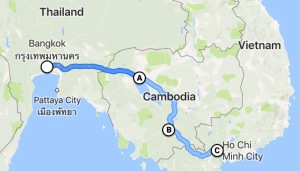 Our route from Bangkok, through Cambodia and onward into Vietnam.

Now for the good stuff, our actual experience…

We stayed at Villa Sweet Angkor Central, it was really cheap at £11 for both of us per night and our room even had two double beds! The hotel also had a small swimming pool which was great given we were nowhere near the sea.

Room to spread out in our accommodation in Siem Reap for only £11 a night! 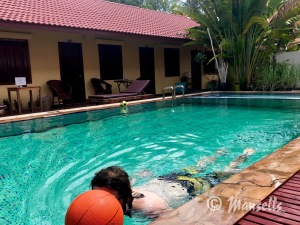 Jonny doing his best seal impression in the pool.

It was a bit of a walk to Pub Street (the street is actually called ‘Pub Street’) which is where all the bars and a lot of restaurants are. This street was really good fun and beers were as cheap as $0.25!!

The next day we took it easy and had a wander around the town. We found a great bakery called Bloom Cafe which had the nicest coffee and cakes!

For Angkor Wat, the temple complex is too big to walk around so you can either hire a tuk-tuk for the day, cycle or hire scooters/motorbikes. We found a place offering electric bikes which we thought might be fun (and more eco-friendly) costing $10 for 24-hours. The lady in the shop told us we could get tickets for Angkor Wat from 5pm the day before and see some temples that same evening. This worked out well as it made it easier for us to get to the temples for sunrise the next day which had been heavily recommended by everyone we met. As we rode to the ticket office, a monsoon from hell came down and we got absolutely soaked from head to toe. It was pretty hilarious walking up to the ticket counter leaving a puddle behind us.

The monstrous monsoon which came down whilst we were riding to the ticket office.

You can either get 1, 3 or 5 day tickets for the Angkor Temple complex. We decided on 1 day tickets and although we did not see everything on the site we felt it was enough for us – you can get a bit ‘templed’ out in the heat if not careful.

After we’d got our tickets, we decided to check out one of the temples that was open until 7.30pm, Pre Rup temple.

Testing the bikes out we went to see Pre Rup temple in the evening.

The way back was funny as we had to ride the bikes no more than 14 kph or risk the bike running out of charge and having to use the most ridiculous looking pedals! We made it back eventually haha.

After a quick shower, we went out for our first taste of Cambodian food at what became one of our favourite restaurants, Temple Design Bar, which was just a few streets back from Pub Street. We tried the Amok curry which was delicious.

Delicious amok curry & rice at Temple Design Bar. Not to mention the $1 beer 😉

Bright and early the next morning (a crazy 5.45am), we set off on our freshly charged bikes (we had to charge the batteries in our room overnight). We arrived at probably the most famous and well preserved temple, Angkor Wat, for sunrise. It was pretty spectacular, even if it was cloudy.

There was a monk giving prayers to tourists. 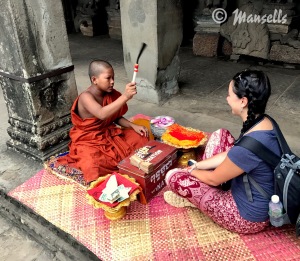 Monk blessing me (I think!).

We spent time looking around the temple and you could even go up one of the spire towers.

Next we went to Bayon Temple which is known for the faces carved into the rock.

The faces carved into the rock at Bayon Temple.

Here, we witnessed the sun have a surreal ring around it which was really incredible. 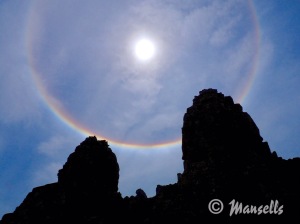 Amazing rainbow ring around the sun above Bayon Temple… does it mean something perhaps?!

We had to stop to charge up the bikes, but used the time to have an early lunch. We tried Beef Lombok, another traditional Cambodian dish.

Cambodian Beef Lombok. To be honest, we preferred the Amok and Khmer Cambodian curries but it was still good!

Next we visited the main gates and a few more temples around the site.

The scale of the temple complex is difficult to comprehend until you are there! Even the butterfly in the photo needed a rest!

Ta Prohm temple (below) is famous for being used in the film Tomb Raider.  It has trees literally growing through the temple walls.

Finally we watched Angkor Wat as the sun begin to set, before making our way back.

Angkor Wat as the sun was setting.

After a tiring day, we treated ourselves that evening to a BBQ plate on Pub Street and a few drinks after 🙂 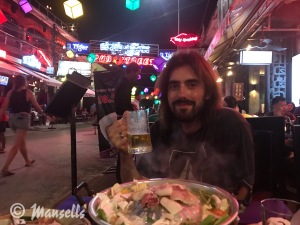 Enjoying a big BBQ plate and beer after a long day at the temples.

For our final day in Siem Reap we decided to spend most of the day relaxing by the pool and having a bit of pampering. I got my nails done for $2 and we both had a fish foot massage with free beer!

Chill out and pamper day- Jonny loved getting his nails done 😉 The fish spa came with a free beer- result!

﻿We had the best curries at Cambodia Tradional Chef – the fish Amok and beef Khmer curry were really good. 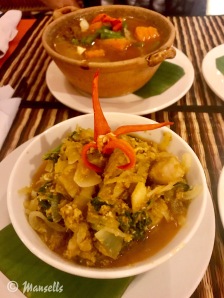 The bus to Phnom Penh was again very simple. It was a small minibus which departed from the main post office. The bus stopped for a break on the 6 hour journey at a beautiful location. 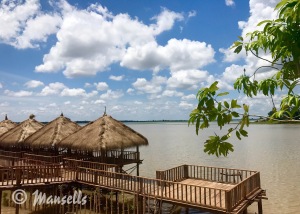 We have no idea where this was as the bus stopped us here for a break on the way to Phnom Penh, but isn’t it beautiful?

Sitting on the bus for so long enabled us to catch up with House of Cards on Netflix 😉 We also met fellow travellers Don and Adam on the bus, and decided to meet the next day to go to S-21 Tuol Sleng Genocide Museum and the Killing Fields. If you haven’t heard of the Khmer Rouge regime or the history around this, I urge you to read up on it. It’s likened to the Holocaust. We didn’t take many photos of these places as they were extremely harrowing. I’d certainly recommend a visit and the audio guide was well-done.

The terrifying rules as S-21 prison, a former school, used during the Khmer Rouge regime. One of the rules reads ‘Whilst getting lashes or electrification, you must not cry at all’.

On the left is S-21 prison and on the right is the memorial for those that lost their lives at the Killing Fields.

That afternoon, we needed something much lighter so we did what many Brits do and went to the pub. We were still with Don and Adam and enjoyed a few rounds of pool, some drinking games and a lot of beer together!

A bit of light relief after the horrific stories from Tuol Sleng Genocide Museum and the Killing Fields.

Sensibly realising we needed to sober up, we decided a Khmer massage would be the best approach. The massage though, was actually really good and involved a lot of stretching (or the beer helped to mask the pain…).

Our accommodation (Longlin House) was in an area equivalent of pub street in Siem Reap. It was great for restaurants but it was a little seedy with many prostitutes outside the bars. We did find one great restaurant called Kabbas Restaurant which had really good Cambodian curries.

Our final day in Phnom Penh was spent wandering around the Royal Palace (it was closed so we didn’t go inside), the river, central market and the National Museum of Cambodia (personally we didn’t feel the museum was worth the $5 entrance fee).

A day in Phnom Penh.

We had a late lunch at David’s Handmade Noodes restaurant but the handmade dumplings were even better!

Handmade noodles and dumplings made right in front of us at David’s in Phnom Penh.

Then it was on to Ho Chi Minh city or Saigon in Vietnam. We were pretty chuffed when the seats we’d booked had extra leg room! 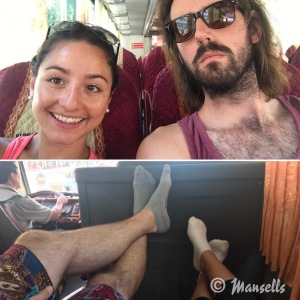 Happy travellers leaving one great country to another!

So there you have it; both breathtaking and unforgettable experiences, the tastiest food, good company and lots of fun. Safe to say we enjoyed our 1-week visit to Cambodia!